RISE SICS North, an EDGE data center was built to show the possibility of using microgrid in combination with data center, using renewable energy sources for going of grid or reduce the grid load. The facility consists of two micro grids: an electrical and cooling system (yellow and blue, red representatively).

At the end of the dual micro grids an EDGE data center is supplying with both electric and cooling, which is a typically size of a 5G facility located at an industry or out close to the end users. The datacenter is pre-made in a factory and easy to install out in field by suing speed connections for electricity, cooling and IT, which also makes it simple for bringing in for service when it could easy be replace it with a new one unit.

The heart of the electrical system is the micro grid controller which power balances the micro grid, by using the normal grid, solar panels, energy storage for supporting the load connected to it. As renewable energy source solar panels are used, the installed peak capacity is 10 kW which corresponds to the power needed of the data center. The battery storage has a maximum storage capacity of 30 kWh, which could run the data center for 3 hours on full load. The data center load is 10 kW either but traditional servers or by an HPC cluster. Furthermore, a cooling machine is connected to the micro grid serving the facility which cold water, when operation in compressor mode it consumes 9 kW.

The cooling micro grid origins from a chiller where 22 kW of cooling power is produced at compressor mode, the capacity is reduced to its half by turning one of two compressors off, the chiller has the possibility to use free-cooling as renewable energy source when the outdoor temperature is low enough. For dissipating the excess heat from the data center a dry cooler is placed on the building roof, which is dimensioned for full chiller capacity resulting in the possibility to use free cooling to a larger extend. For storing chilled water a storage tank of 2 m3 is installed which can be used for expanding the usage of free-cooling, when it could be loaded during nights and emptied in day time. In the data center an air handling unit is place above the two racks supporting the natural convection of the air, ware air from the servers is raises due to its buoyancy and goes through the cooler and falls down on the back side of the racks where it´s once more warmed by the servers.

The complete facility is measured and operated by the control system installed at RISE SICS North, where operation optimization and evaluation could be performed. In the storage tank eleven temperature sensors is placed for finding the stratification level, in that way finding the availed chilling power. The water temperature from the chiller could be varied based on the outdoor temperature, making the most possible usage of the free cooling. For supplying the data center with cooling a pump is used extracting water from the storage tank, the pump speed is variable by that the return water temperature to the tank is adjusted. The fan speed of the air handling unit is controlled supporting the air mass flow inside the data center, by this the pressure differences between cold and warm isle can be set. 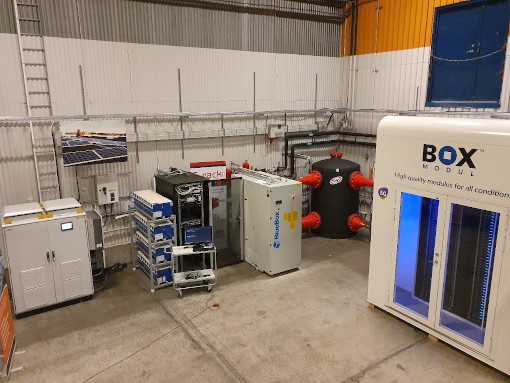